In August he started his work in Poland, the popular e-shop About You.

The Magnificent Opening of the About Online Store was accompanied by a huge over-the-top campaign in which creators did not hesitate to use all available channels such as television, the press, and of course the internet as well.

As a part of the acquisition campaign was a prestigious opening event, attended by dozens of guests from influential, celebrities, journalists and of course people from the field. The team About You did not let anything happen and they detailed prepared all the campaign.

In this fact, it very pleased us, that the company approached us with the offer of cooperation. Voucher package inserts are a very good form for an acquisition campaign.

The campaign was planned as a printed – voucher form with the discount of 15% for some selected items of products. The Client´s wanted also define the behaving of the different target groups in addition to acquiring new customers. Therefore, a number of appropriate target groups were created, each with special discount codes, in order to evaluate the response for each separately and to plan additional campaigns based on the evaluation. 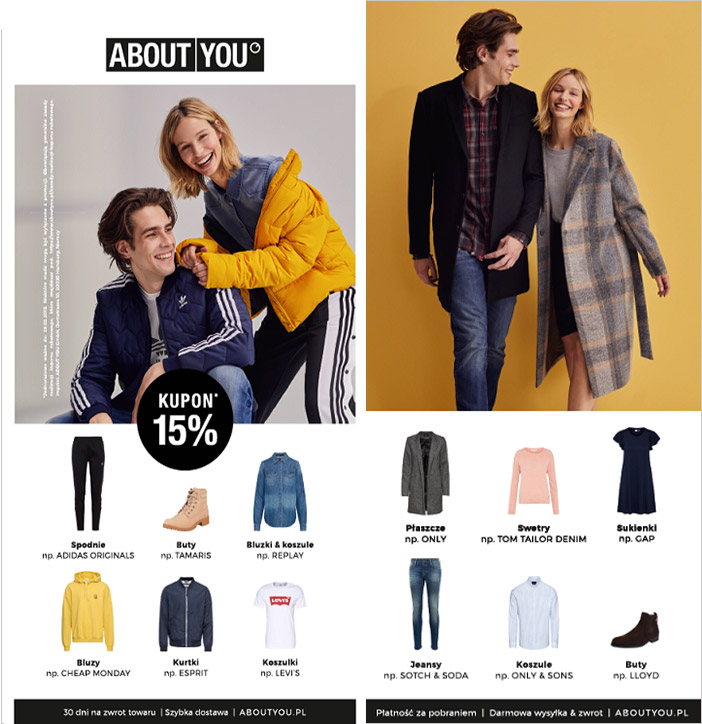 About You is already in seven markets

The fact that the e-shop has been honestly preparing for its start is also proved by its offer. From the first day you will find more than 70,000 products from over 500 fashionable brands such as Calvin Klein, Gant, Adidas, Nike, as well as private brands About You or Edited. In this way, the price range affects all segments, from the cheapest to the premium. Customers will also be happy to receive free postage or a 100-day return period.

About You has been in the German market for 4 years and is the second-largest online retailer of fashion there with a turnover of just over 283 million euros. In the old continent, it is also in Switzerland, Holland, Belgium, Austria, and since October in the Czech Republic, where a large acquisition campaign is also running in parallel. About You has entered the eastern e-commerce markets really well and we think that in the foreseeable future we will see whether it remains only in these two countries or whether it will shift to other markets.

Use PAKIET PLUS LOYALTY programs for communication with existing customers

Why not to use your own packages for communicating with customers? Retaining existing customers is for most companies significantly cheaper than acquiring new ones.